TechConsumer has had its fair share of Digg coverage lately. But for those of us who remember what Digg was back in the glory days, we can’t help but draw attention to its flaws in the here and now.

First, we had our April 1st interview with Digg’s founders discussing priorities and progress and how Digg is just a game. Second, we discussed the Digg paradox and how getting rid of the editor/gatekeeper just creates new gatekeepers.

But today’s topic, for me at least, feels like the most interesting twist on the story of where Digg started as compared to what Digg has become:

Digg is based on an algorithm that makes sure a certain “diversity of diggers” threshhold is met before a story makes it to the front page. So even though Digg has a friend system with “shouts” for sharing stories, if used, it doesn’t necessarily help any story you’re sharing get to the front page. What you really need are diggs from users you don’t know (if your goal is to bring maximum awareness to a story or submission).

But Digg is so huge now with ten thousand submissions every day. As a result, Digg’s upcoming queue–where all new stories sit for up to 24 hours–moves quickly and is difficult to sift through. This means that even if your submission is interesting, you can’t rely on the Digg site itself as a mechanism for other diggers you don’t know to find the story you submitted.

So now we’re back to the same question: How do you get people you don’t know to digg your [assumed to be interesting] submissions? The easiest way, I’ve found, is to submit only content from sites that have a) a huge audience and b) Digg tools integrated (buttons on the story itself that show if it’s been dugg and how many diggs).

These sites are generally so well known that they have plenty of readers that make for the perfect storm for getting content to the Digg front page. That is, readers that are Digg users but aren’t friends with each other. Let’s take a look at an example that illustrates how this works:

Yesterday, TechConsumer had an article in the upcoming queue with over 100 diggs (see image below):

Right around the same time the above screenshot was taken, this story from Gizmodo (image below) hit the front page with 33 diggs:

About a half hour later, I noticed something even more interesting and decided to take a screenshot (see below). I was browsing the front page of Digg and realized that the top six stories on the page all had less diggs than the TechConsumer story that never made it. All these submissions were from major websites (BBC, Yahoo News, Gizmodo, New York Times).

In fact, you’ll notice that it took the previously mentioned Gizmodo story 30 minutes of being on the front page to accrue the same number of diggs as the TechConsumer story that never made it. 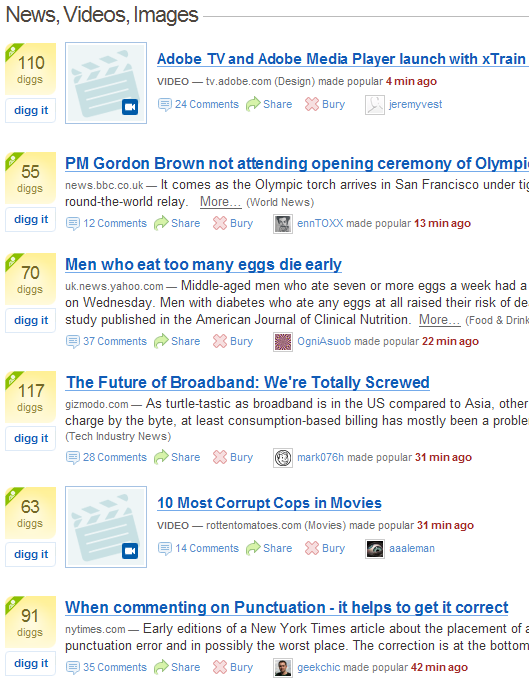 So what does this mean? For one, I can tell you that the TechConsumer readership doesn’t even come close to any of these sites. And, as a result, any readership and Digg user overlap is much more likely to be by Digg users who know each other (i.e., are friends on Digg). This is likely to be the case for any smaller site.

And for your double dose of irony today, this makes Digg closer to Yahoo Buzz. Yahoo Buzz is described as “a Digg-like site that takes stories from pre-approved news publishers (100 to start) and let’s users vote on stories and push them up to the top of the page.”

It should be noted that how Digg works currently isn’t necessarily a bad thing. It’s just no longer a model that follows what Digg itself claims to be. In fact, Digg should really update its “About Us” page. Here is what the first two sentences say:

“Digg is a place for people to discover and share content from anywhere on the web. From the biggest online destinations to the most obscure blog, Digg surfaces the best stuff as voted on by our users.”

It’s obviously not that simple.

From my experience, Digg is turning more into a place to see what is popular in the mainstream yesterday (since it takes nearly a day for many stories to hit the front page). Again, not necessarily a bad thing, but that kind of information (i.e., “mainstream yesterday”) seems to be available all over the place nowadays…