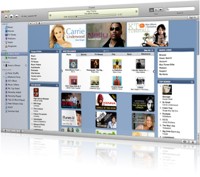 Apple has issued a press release about becoming the number two (behind Wal-Mart) music retailer in the U.S. Best Buy used to have that spot, but music downloads seem to be catching on. Well, that and CD sales are declining rapidly.

Apple claims that 50 million customers have bought over 4 billion songs with 20 million sold on Christmas day alone. That’s impressive even if digital music purchases have yet to offset the decline in CD sales.

Despite the positive news, Apple has plenty of competition to worry about: Amazon, to be specific. I reviewed Amazon MP3 when it first came out and switched to it from iTunes as my primary method of buying music. In short, Amazon MP3 is often cheaper ($0.89/track), it’s all DRM-Free (no restrictions), it’s higher quality (256 kbps), it’s more accessible (MP3), and it has no switching costs (integrates seamlessly with iTunes).

But whichever you use, it’s nice to see that there are some good choices for online music downloads/purchases.