Backing up your computer is something you don’t want to think about; you wish it would just happen. With that perspective, I thought I’d bring up the online backup service offered by Mozy. I use it for both my laptop and desktop and now think of backups only when I desperately need to restore something (which can happen more often than you think).

Mozy has a free version, which allows you to backup two gigabytes of data. It requires no credit card and is quick and easy to install. And it’s no different than the version you pay for in terms of features and options. The only difference is that if you do pay $5 per month, your backup has no size limit (if you are interested in the Mozy Unlimited version, when signing up, use promo code TECHCONSUMER to get 10% off an annual subscription or TECHCONSUMER2 to get 10% off a biannual subscription).

In either version, the software automatically detects what it thinks are your most important files needing backup and compiles them into “backup sets,” such as Favorites, My Documents, Music, Photos & Images, Videos, etc. But if you’d rather backup your data from a typical Windows Explorer kind of view, that option is easily accessible by just clicking on the “File System” tab.

The company has had a serious credibility boost via an action-packed year last year. Here’s a wrap up:

See below for a chart that sums up nicely what Mozy offers when compared to the competition. Keep in mind that this is straight from the company’s website, though I can attest to having used many of the features listed that aren’t offered by the competition (same goes for Mossberg in his review). It can be the little things that seem to make the difference, such as the option to have all your files sent to you on DVD or Mozy keeping multiple versions of your files for 30 days.

So if you want a free, simple-to-use backup, try the free version of Mozy. If you want a more complete backup solution for your computer, it’s hard to beat the unlimited service offered for $5 per month. And if your backup needs are more robust, MozyPro is definitely an option, which includes a bunch of additional features: 24/7 support, server backups, administrator control for the IT department, etc. 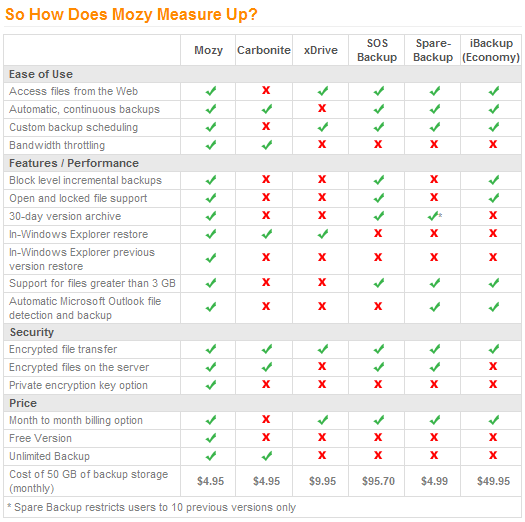 Disclosure: Mozy is a sponsor of this site, though I have been using Mozy as my backup solution well before it was a sponsor (and before any of the positive news from last year). Sponsor or not, I use it and recommend it.