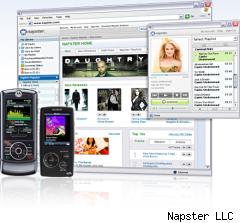 Last year around this same time I wrote on the then current companies killing DRM (Digital Rights Management, music with restrictions). Coincidentally, this year has the month of January giving us even more news on the battle-for-unrestricted-music front.

Here’s the latest news about music within the context of Amazon, Napster, Sony, and Yahoo:

Amazon MP3 now offers DRM-free MP3s from Warner Music Group’s catalog, which makes Amazon’s MP3 download store the first to offer DRM-free music from Warner Music and brings Amazon’s library up to 2.9 million songs, all without restrictions. Warner’s catalog includes some of the most popular artists: Led Zeppelin, Metallica, Madonna, Green Day, Red Hot Chili Peppers, etc. And Amazon may eventually have something in the works with Yahoo (speculation, see Yahoo news below).

I reviewed Amazon MP3 when it first came out and found it superior to iTunes for music purchasing: it’s cheaper ($0.89/track), it’s all DRM-Free, it’s higher quality (256 kbps), it’s more accessible (MP3), and there are no switching costs (integrates seamlessly with iTunes and most other popular desktop music programs). If you haven’t already, check out Amazon MP3 here.

Napster will sell music downloads in the MP3 format starting in the second quarter of this year (ironically enough, the format that made Napster popular in the first place even if back then it was illegal). CEO Chris Gorog said the following:

“We projected a year ago that there would be a critical mass of support for MP3, and we’re pleased to see the music industry is beginning to support it… There’s now enough top-tier content out there. There’s little question that the broad adoption of MP3s will provide an uplift for the industry.”

Sony BMG, the music label that’s taken the longest to think of a solution that doesn’t involve DRM, will start offering DRM-free music very soon. Reports on this news are a bit conflicting, however. A Businessweek article started the buzz by claiming these songs would be available via Amazon MP3, starting with Justin Timberlake’s latest. But then, a date of January 15 was given as the beginning of Sony DRM-free music but with a twist:

You have to purchase a plastic card called the “Platinum Music Pass” for the album you’re interested in. These plastic cards are only available from retail stores and cost $12.99 (significantly more than Amazon or iTunes album purchases). You then have to visit MusicPass.com and enter a code to download the DRM free album you selected in the store. It looks like Best Buy and Target will be the first stores to start this experiment. Perhaps not the best DRM-free news but progress nonetheless.

Yahoo Music’s VP of Product Development Ian Rogers has been hinting at big news revolving around dramatic changes in Yahoo’s music model. He said, “We’re in the process of redefining what Yahoo! Music is, and making it the Music destination in Yahoo!’s successful image.” And then he explained that Yahoo is not a music retailer and probably won’t be anytime soon.

He had plenty more to say with the focus on merging all sorts of content within a music context:

“Today users are creating tremendous value and for the most part we’re ignoring it. They’re writing blogs about your artists, putting bios on Wikipedia, documenting last night’s concert on Flickr and video sharing sites, showing what songs are most popular by their behavior on Last.fm, building “box sets” on community sites, etc. How has the music industry leveraged this? What tools have you created to enable or encourage it?”

I agree with TechCrunch’s assessment that, “…it looks like Yahoo wants to spearhead an effort to create open standards around music buying, playing, managing and sharing… In one set of slides near the end of the presentation, he shows a use case where a user discovers music on Yahoo, links to purchase it at Amazon, and then manages it again back at Yahoo. My guess is this is exactly what Yahoo will be. They’ll abandon their subscription music service and promote third party music download sites like Amazon instead. But I also imagine they’ll do this via a set of open standards where any service can participate.”

Well, 2008 seems to be off to a good start with DRM-free music options. Now if only DRM-free could be extended to other forms of digital media (movies, etc.), maybe 2009? If only…