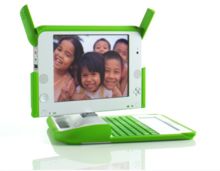 The One Laptop Per Child (OLPC) program started at MIT was developed with the intention of getting $100 laptops to kids in developing nations. While the price tag is almost twice that, they’re still working to get it down.

The laptop, currently called the XO Laptop, has had some success with the recently announced “Give One, Get One” program. For just $399, the deal buys both yourself and a child from a developing nation new XOs. The non-profit is reporting about $2 Million worth of donations each day.

Now the latest news has Microsoft coming out with a statement saying it is trying to rework Windows XP to run on XO laptops. The company has outlined the challenges (a good rundown of them can be found here) it faces in this unusual project. The biggest challenge cited is the fact that the XO laptop uses flash memory rather than a traditional hard drive, which is what Windows normally needs.

James Utzschneider, general manager of Microsoft’s Unlimited Potential Group, explained that testing of Windows-based XO laptops will begin in January 2008 in the U.S., India, and maybe Romania. The goal is to have Windows-based XO laptops ready by the second half of 2008. “We want Windows to run on the XO and we are investing significant energy and talent,” Mr. Utzschneider said, “We really want to make sure we have a quality experience before we make commitment to governments.”

Sales of Windows is still one of the biggest chunks of Microsoft’s revenue, so it will be interesting to see how the company will arrange the structure of this deal in the long run. For now, Microsoft said it had no plans to offer a version of Windows for the XO for retail purchase in North America. If all goes as planned, this version of Windows appears to be strictly for use in developing countries. But in a world where borders are shrinking, Microsoft may have yet another challenge on its hands.