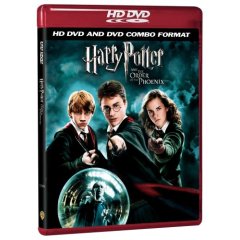 Perhaps in an attempt to differentiate itself from Blu-ray, HD DVD tech wizards will launch the HD DVD version of Harry Potter and the Order of the Phoenix with a new feature called “community screening.” The movie takes advantage of the fact that all HD DVD players are equipped with an Ethernet hookup (unlike Blu-ray, which has players that do not include network connectivity). “Community screening” is a way to watch a movie simultaneously with your friends while you’re each in the comfort of your own homes. Here’s how it works:

One of you sends out an invitation to join a viewing of the movie, which then syncs your movie watching experience with your friends that accept the invitation. While watching, you and your friends can exchange chats through the remote, a computer, or cellphone. The catch of this social movie experience is that only the host will be able to play, pause, or otherwise control the movie.

Here’s a quote directly from the release site:

“Gather your own army of fellow wizards for a live community screening party. Invite other owners of the Harry Potter and the Order of the Phoenix HD DVD to simultaneously watch from their own internet-accessed players and text with your remote, PC or cellphone. When you host an invitation-only viewing, you control the film by pausing and playing the feature on everyone’s machine. You can chat live with your friends as you watch.”

So is it a gimmick or a feature? It’s hard to say at this point. But the battle between HD DVD is a heated one for sure, and it has only escalated for the holiday season. The HD DVD Promotional Group announced last week that sales of HD DVD players increased significantly because of last week’s Black Friday sales (of which I participated because of Amazon’s amazing deal, which made HD DVD at least half the price of Blu-ray). Sales over that particular weekend were apparently enough for total HD DVD players sold to come close to 1 million (they were hovering around 750,000 previously).

But the battle is far from over. The Blu-ray Disc Association had good news of its own claiming that Blu-ray is outselling HD DVD discs in Europe at a ratio of over three to one. But in the U.S., Sony’s Playstation 3 is the main reason Blu-ray has seen any success. According to Adams Media Research, 94 percent of Blu-ray players purchased in the U.S. are simply a byproduct of gamers buying the Playstation 3 (which just had a recent price cut).

*Update 2* Check out our latest coverage of comparing HD DVD and Blu-ray via the best deals available on Amazon.