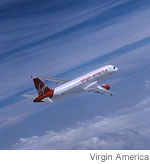 Beginning Wednesday, Virgin America will offer daily flights linking San Francisco to New York and Los Angeles. Virgin is apparently trying to compete with the major U.S. airlines both in terms of price and features. Tickets between San Francisco and New York are competitive at just over $250.

And the airline hopes to be an attractive alternative due to its on-board amenities. The seatback entertainment system allows you to enjoy satellite TV, radio, and games. You can even order food, create a playlist from a library of 3,000 digital songs, and send each other text messages.

Low price and on-board amenities are great ways to attract me as a consumer. But what about those not-so-techie issues of customer service, delays, and leg room? Incidentally, my wife and I just flew across the U.S. a couple days ago (via American Airlines). We booked the tickets through Priceline.com nearly three months in advance and assumed we would sit together.

To our dismay, we found that one of us was assigned to the front of the plane with the other all the way in the back. When I complained, I was told it was my own fault: I didn’t call in or make note of my desire for the two of us to sit together. Apparently, when you order two tickets at the same time for the same flight (well in advance when the plane isn’t even close to being full), it’s assumed you’re likely to sit apart. Sitting together now requires making a special request?

Call me crazy, but I’d rather enjoy sitting next to my wife (without having to ask for it) before I’m ready to get excited about a seatback entertainment system. Here’s hoping Virgin America doesn’t forget the little things in lieu of whiz-bang technology…