The Yahoo Suggestion Board, Dell IdeaStorm, and MSN Reporter were all released last week and were all at least, shall we say, “Digg Inspired.” But should we call them Digg clones? How similar are they? Let’s take a closer look and compare things like purpose, voting/bury style, uniqueness, algorithm, login, default view, etc. See the chart below.

Interestingly enough, I found the look and feel of the Dell site to be the closest to Digg. And that’s a compliment. It has a simple account, nice layout, and tracks your submissions/votes/comments with the added bonus of having the coveted now-extinct-on-Digg “Top Contributors” feature.

Yahoo’s site feels the most simplistic and is likely my least favorite, though it’s probably good enough as the feedback agent it was intended to be. And Microsoft’s MSN Reporter (currently released only in Norway and Belgium) is the only site of three with a news (rather than feedback) purpose. Meaning, it’s the only one that, in its current state, actually competes with Digg.

But the Microsoft site is relatively weak in terms of its social scene. There is no account, and hence, no tracking of your submissions/votes/comments. So that means each time you submit a story, you have to provide your name and email (which could be fake). And you can spike the vote by voting from different computers or different browsers on the same computer.

In any event, Digg shouldn’t be too worried at this point. The only site of the big boys’ directly competing is Microsoft, and it’s not doing a great job. See the chart below for more details (click on it for a clearer picture to pop up in a new window): 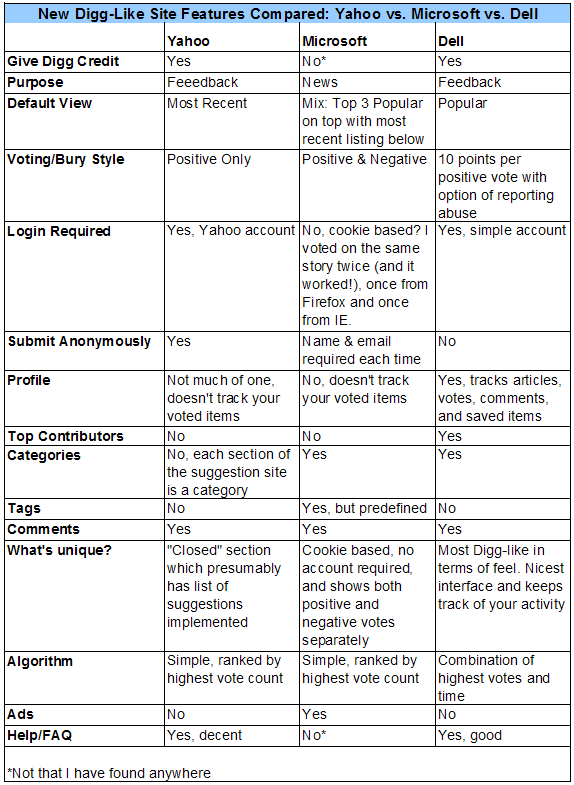 *Update* More opinions are flying about these sites, check out: Techcrunch’s take, Profy’s take (which references yours truly), and rev2’s take (which seems overly excited about MSN’s clone).