This is part 3 of what I’ve decided to call the “Will Workout Series.” Part 1 was discussing how the new Nintendo Wii is causing aching backs and sore shoulders (among other things) across America. Part 2 was a poll to determine if it was just Americans or if others are experiencing this phenomenon. And part 3… The results of the poll!

The poll is still open for anyone interested, but the results I’ll analyze and discuss here are from the first 300 votes. To recap, the question was “If you own a Nintendo Wii, how much of a workout is it for you?” Here are the results (followed by commentary below): 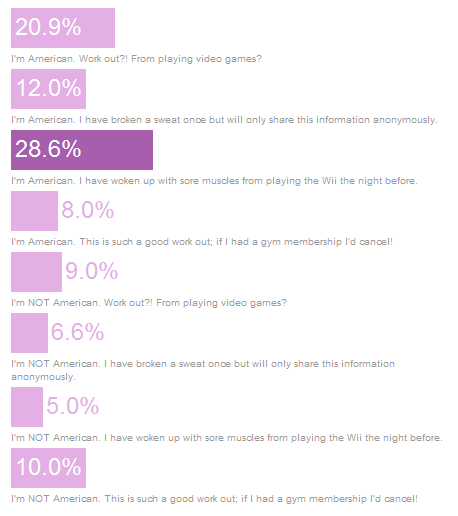 So approximately 69% of voters were American whereas the remaining 31% were not American. Analyzing the two groups independently of each other, here’s what we get:

Highest Vote – Approx. 41% of Americans said “I have woken up with sore muscles from playing the Wii the night before.”

Lowest Vote – Only 12% of Americans said “This is such a good workout; if I had a gym membership I’d cancel!”

Highest Vote – Approx. 33% of those not American said “This is such a good workout; if I had a gym membership I’d cancel!”

Lowest Vote – Only 16% of those not American said “I have woken up with sore muscles from playing the Wii the night before.”

Interesting how the lowest and highest votes for Americans vs. Non-Americans is exactly opposite. Here’s my wild speculation: Both agree that the Wii is at least some sort of workout. But Americans favoring the response of “sore muscles” just might illustrate that they aren’t used to workouts in general whereas those who are not American know a good workout when they see one, even if it’s just there to replace or supplement what they may already be doing (hence, not as much muscle soreness).

Again, no one take this too seriously. It comes with all your standard disclaimers of not necessarily being accurate, etc. But still, what else do you think the difference could be (if there is one)?